by MrScotty
I think the green muddies my enjoyment of the purple and yellow, personally, and I'd go way brighter on the yellow. The reason to do purple and yellow would be for the contrast, if you blend them visually you'll just end up confusing the eye.

For the same reason I think you want to tone the flesh way, way down. Pretty much every visually stunning nid army I've seen has been carried on the cool stuff you can do on those carapaces - check out the 'Coconut Crab Tyranids" for example. On all of those the fleshy bits take a super backseat with neutral colors and minimal contrast, because those tend to be the parts of the models that are busiest.

In my opinion, "Spent a long time on the shell" nids are vastly superior to "Highlighted every tendril and grooblybit, drybrushed the shell" nids. I think just doing a second layer of super bright yellow in those highlight patterns would make them extremely cool to look at.

I did a flesh tone on my Drukhari racks that would probably work fairly well, basically started on a pale green and did a thin highlight layer of pale fleshtone, the effect was that the green was in there but it just ended up looking like disturbing/ zombie-ish flesh instead of immediately screaming "GREEN". That let me keep the cool muscly flesh they had interesting while not distracting from the focal points of the models which were the masks and weapons.

by Draaen
Yeah that lighter type of flesh colour with green was what I had in mind to try out. I think it would pop well with the purple scales. Kind of similar to the leviathan colour scheme really with a rich purple scale and a very pale fleshy tone. I think I agree with you on the purple/yellow blending. Probably best to make it be a bit more of a stark delineation. I also agree 100% on the scales. They are a big part of what made me choose the nids in the first place.

I have seen the cocunut crab tyranids and they look really cool. What is extra neat about them is that his "blending" is just put squiggles and dots all over the place so that your eye is fooled which is really cool. The main focus of the painting / modeling here is to team up with my brother and try to get best painted for doubles at an event which uses a rubric scoring. While we may fail due to execution I am trying to keep the rubric in mind to make sure I have a chance to maximize the scores. So I thought a purple coconut crab shell would not score as well on the rubric. On the plus side there definitely is a cool pattern out there that will work with the rubric and look awesome.

Speaking of the rubric here it is. 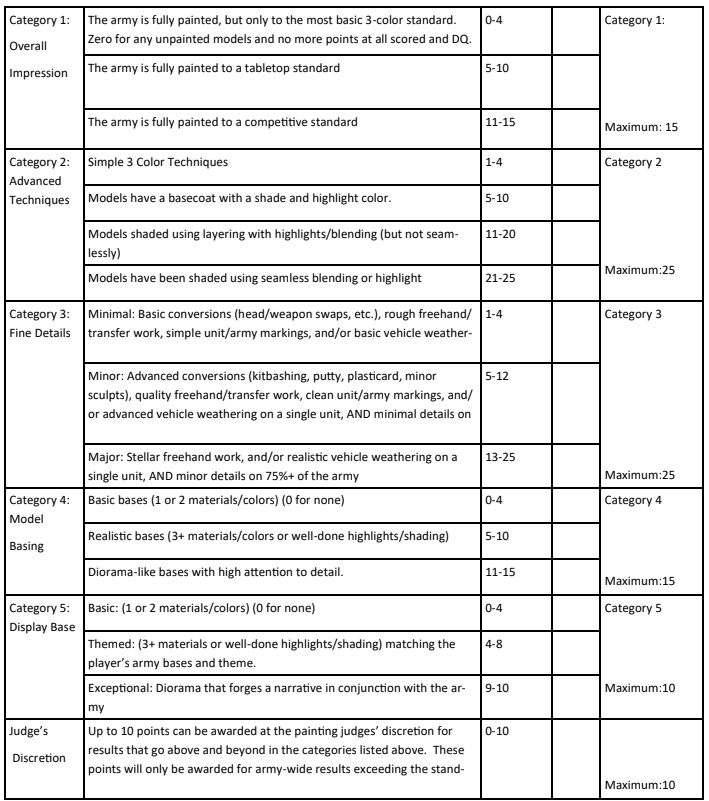 Getting together with my brother this weekend so I began mocking up one of my ripper swarms. I plan on doing my squad markings based off of the unit type being devoured. He is going primaris so I am thinking I can do a reiver, incursor and infiltrator squad. I can get some sculpting in by having the rippers wrap around arms, legs or be burrowing into people as in this case. It has the nice added effect of making the base feel like more of a swarm too. Trying to do water effects so I added a recessed area within the base to flood after the model is finished. Pretty happy with this as a first look but I was questioning my life choices as I was cleaning mold lines off of hordes of rippers. 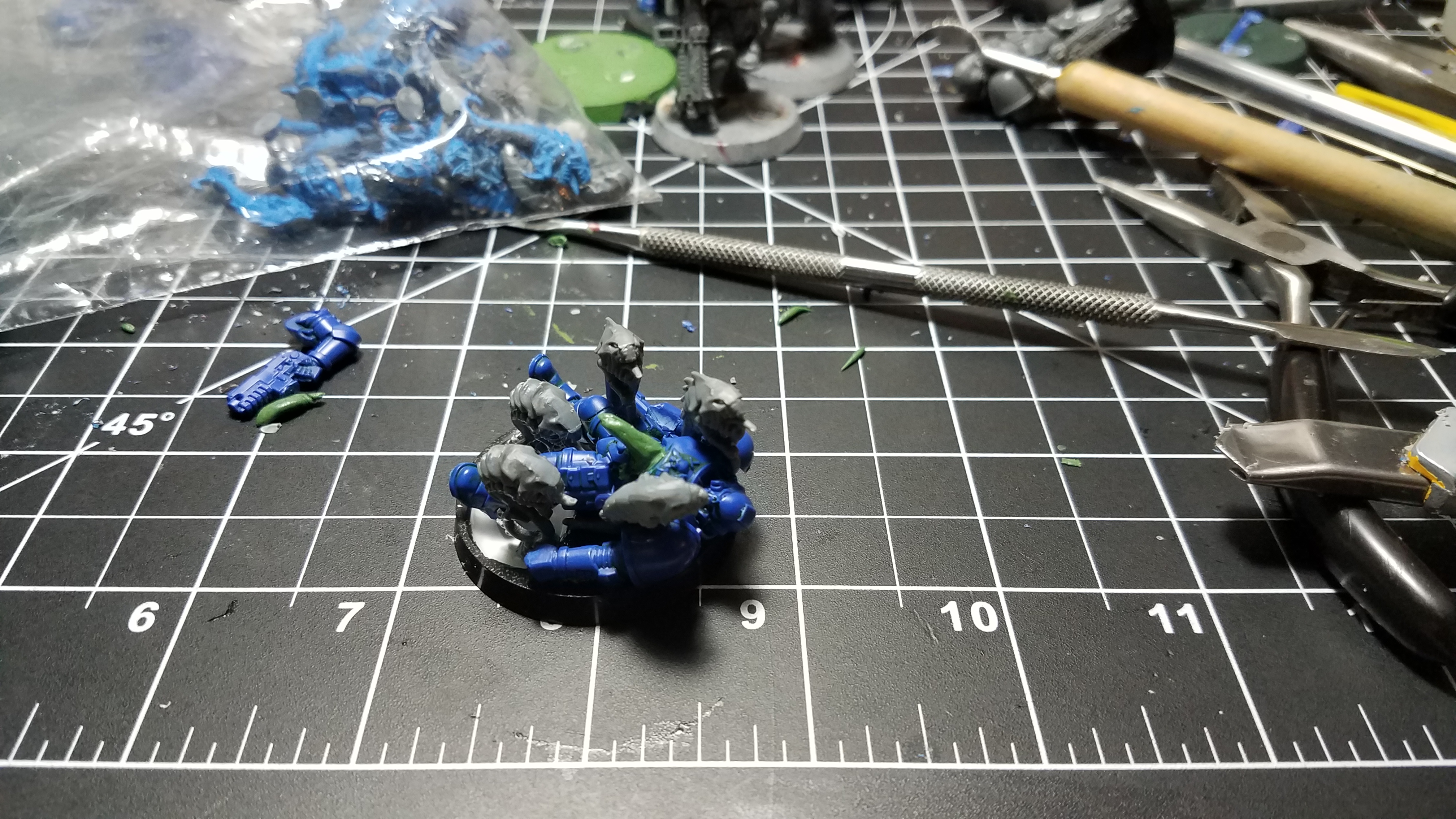 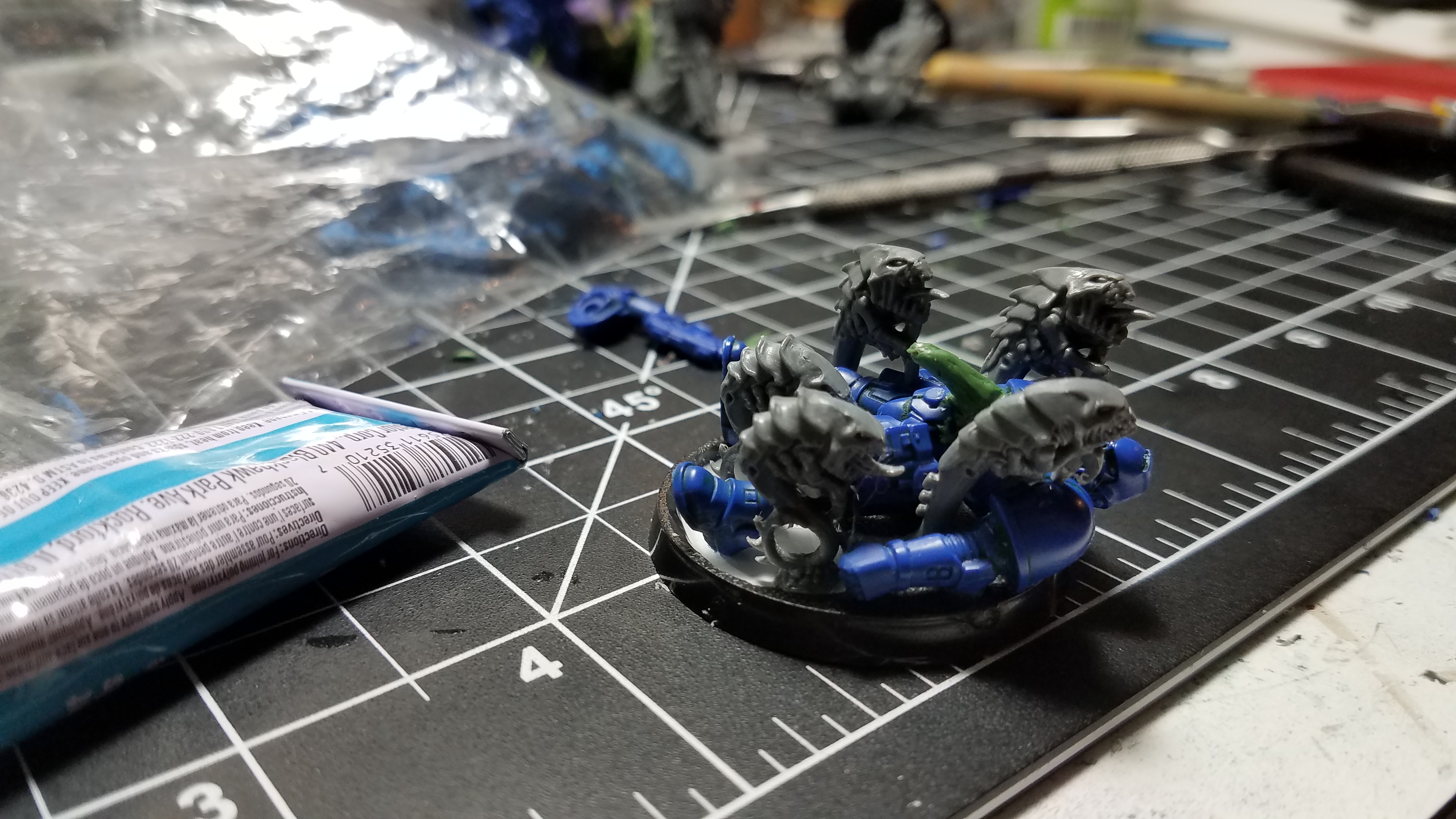 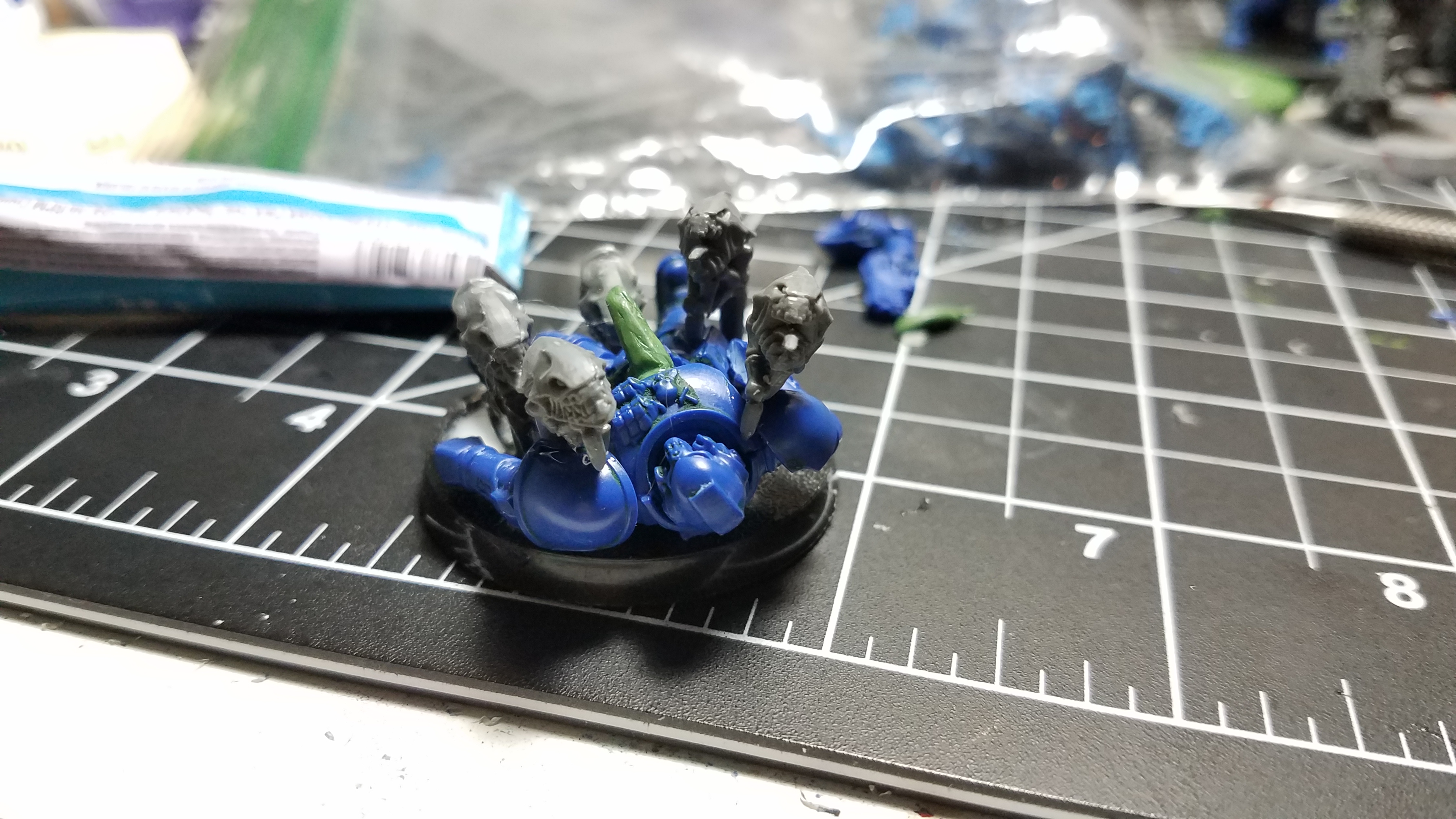 Still need to figure out basing. We have pretty well agreed on a swamp battle. The tyranids have overrun the first line of defense and my brothers phobos army is the second line the nids are charging. Basing needs to be consistent between our two armies. I was wondering if anyone had any good muddy/swampy bases or muddy/swampy weathering techniques. We might do a funky coloured swamp but really in my mind it's a lot of mud, water, foliage and some fallen logs. Anybody have any good recommendations for some fallen trees? I mean I could just snap some twigs and bake them but tbh I'd rather just find a good durable source that I will be sure won't begin degrading if I treat it wrong. That and I am not sure what kind of look Alicia will give me. I already got a look when baking dirt!

by Sandtiger
Agrellan Earth looks very mud-like and is an easy solution to at least part of the problem. All you do is put a nice big coat of it down on the base, let the stuff dry out, and when it dries out it cracks up on its own which leaves it looking like mud. The logs and foliage would be up to you from there though.
All times are UTC-05:00
Page 4 of 4
Powered by phpBB® Forum Software © phpBB Limited
https://www.phpbb.com/