"Wait...is that right?!" Why not ask? This is the place to share a rules question (or revelation) you learned at the table.
Post Reply
61 posts 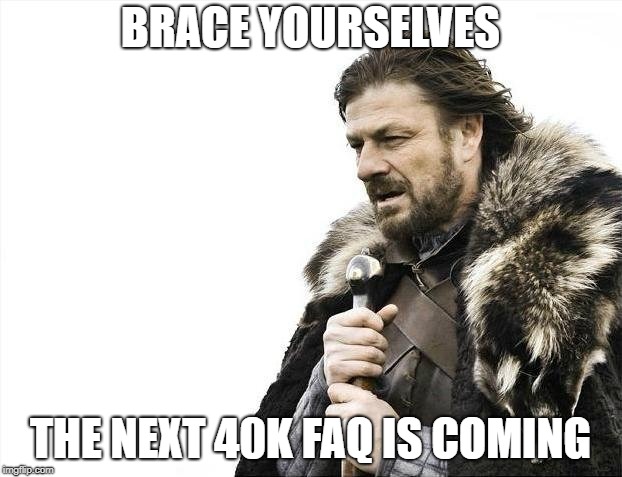 Games Workshop will be releasing the next 40k FAQ update later today. Please use this thread to express whatever range of reactions best suit you.

Good luck and may the FAQ be ever in your favor!
Top

I wont know till I play it but I have the feeling the deepstriking change is really going to hurt my thousand sons. I had been leaning pretty hard on the deepstrike crutch to feel competitive, yeah that hurts.

From core rules FAQ:
Q: The rules for reinforcements say that when a unit is set up on
the battlefield as reinforcements, it cannot move or Advance
further that turn, but can otherwise act normally (shoot,
charge, etc.). ... Can such a unit move or Advance for any other reason
e.g. because of an ability such as The Swarmlord’s Hive
Commander ability, or because of a psychic power such as
Warptime
from the Dark Hereticus discipline, or because
of a Stratagem like Metabolic Overdrive from
Codex:
Ty r a n id s
, etc.?
A: No.

Wow the battle brothers rule is going to take the teeth out of some list builds.

I like the CP boosts on the battalion and brigade, will widen the gap between troop heaving armies and more elite armies. Although elite armies are somewhat already behind in this infantry blob edition. But at least this clearly spells out GW's intent on how they want their game to be played.

The points cost increase (a staggering 60%) on a warlock is ludicrous, there is no reason to take one over a spiritseer at all now.

In the Tau FAQ it looks like if you want a High output burst cannon you HAVE TO keep the missile pod as well, it's now worded you can replace the hobc AND missile pod with two systems or ranged weapons instead of and/or. This is why we magnetize things. either way my build costs are going up on my coldstars.

Tau homing beacons will not be useful turn 1 and will need to be used from turn 2 on tipping the risk/reward scale further toward more risk less reward.

They didn't exclude drones from the cap of 3 datasheets. Tau players will likely have less drones in their lists now. Not sure how this effects drones that are attached to vehicles? Maybe they get a pass? Otherwise you will want to swap the drones out for other secondary systems if you plan to use drones in other places in your army.
Last edited by The cosmic serpent on Mon Apr 16, 2018 1:55 pm, edited 3 times in total.
Top

Big FAQ is Up!

It is big lots of changes.

Beta deep strike rule changes it to half your power level not unit count. And 1st turn only set up in your deployment zone unless you are the genestealer cult or raven guard forward deployment style stratagem.

No stacking FNP and a bunch of other stuff.

That beta deep strike change really puts a damper on my white scars and the aggressive tau suit list. The commander limit is effectively the same for every other HQ choice. Although it sounds like captain in terminator armor, on a bike or regular lock and stock would all be separate entries.
Game Preferences:
Current Beta rules in effect
I'm happy to play lower points levels with people who are staring out or building up new forces
Top

Thanks Anthony, I'm not sure you're helping

Game preferences:
+1 to going first roll if you finish deploying first
All terrain is "statuary"
No First Blood - it's basically a bonus VP for going first
Current Beta rules

Does the club have any official stance on Beta rules?

...besides "talk with your opponent before the game starts?"

When the Smite changes and Character targeting tweaks were Beta, (IMHO) they seemed like slight adjustments.

These Beta rules have some serious implications for various factions and builds. I applaud their attempt, but it seems a bit heavy handed.

i.e. rather than being restrictive with how many ingredients in a soup (pushing on a string), why not just give more stackable bonuses to mono-faction builds? (pulling on a string)?
“Fairy tales do not give the child his first idea of bogey. What fairy tales give the child is his first clear idea of the possible defeat of bogey. The baby has known the dragon intimately ever since he had an imagination. What the fairy tale provides for him is a St. George to kill the dragon.”

Lots of armies got beaten by a Nerf bat, others just got more command points.
You do not have the required permissions to view the files attached to this post.
Top

RAW the rule limits DATASHEETS, not models. That means that drones that are taken on a different datasheet are not all the same unit - they're a part of the devilfish or stealth suit team or whatever that purchased them even if after deployment they split.

Same with vehicle squadrons. You can have 3 leman Russ DATASHEETS, which means up to 9 russes that become autonomous when they deploy.

The only reason this 3 limit thing bugs me is...transports. Many armies are highly limited to their transports, and it's not exactly spamming if I take a unit of kabalites, a unit of wyches, a unit of incubi and a unit of Wracks and put them in 4 Raiders. That's just a goofy restriction, especially after you don't limit troops. It necessitates building your list in weird unfluffy ways to get around it rather than addressing the core problems of some units (primarily HQs, and troops that aren't affected at all) that are so good and spammable that they warrant just filling your list with.
Game Preferences:
A model may assault upper levels of terrain if they charge far enough to climb them
All current beta rules in effect unless opponent prefers otherwise
I love setting up custom, fluffy scenarios, PM me!
Top
Post Reply
61 posts